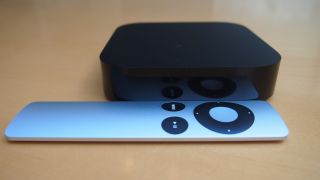 The writing is in the build for a refreshed version of Apple TV.

Spotted by 9to5Mac, "Apple TV 4,1" has made its presence known in iOS 7 software builds, tucked away in a reference to the set-top box's AirPlay framework.

The current version of Apple's TV "hobby" is 3,2. With such a drastic jump to 4,1, we're likely in for some vastly different internals.

Don't get your hopes up for the Apple iTV, however. 9to5Mac surmised that since this new version sticks within the existing nomenclature, the new product is likely just another set-top box and not an entirely different product category.

That's not to say the next-gen Apple TV won't have something exciting to offer.

The build also references iOS 7's Game Controller framework. While this may be remnant code from the iPhone, iPad or iPod touch, there's a chance we're looking at reference to an actual gamepad that would connect to the new Apple set-top.

Previous rumors have suggested the next version of Apple TV would include support for new kinds of content, namely a dedicated App Store that may really be more of a Game Store.

Apple TV Bluetooth controllers are reportedly already in the hands of game developers, and although we don't have a release date for the new box, signs are pointing to a spec'd up and gamed up version launching sometime this year.