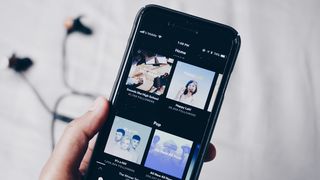 The latest new feature to be undergoing testing at Spotify would seem to be shared queues – tracks of upcoming tunes that you can listen to and edit together with friends.

Spotted by noted app expert Jane Manchum Wong, this "Social Listening" option builds on the shared playlists Spotify already has – but in this case you and a group of other users can chop and change a queue as it plays on a particular device.

Obvious uses for this include house parties and road trips, where you can introduce your friends to your favorite mumbling indie rock folk, high speed free-form jazz improvs, or whatever else you happen to be into.

Social Listening works through a code that shows up in the Spotify app – friends can scan this code on their own phones to get involved, or you can share it via the usual channels.

Spotify has yet to confirm the feature is being tested, and there's no guarantee that it'll ever see the light of day as a part of the official Spotify app. Right now it only seems to be open to Spotify employees.

App developers are of course testing new features all the time, it's just that we usually don't find out about these tests. We'll have to wait and see whether Social Listening gets the thumbs up from Spotify in the end.

It would certainly make sharing music in a communal environment a lot easier – assuming everyone was signed up for Spotify and not Apple Music or YouTube Music.

Last month we heard that Spotify is also testing a Stories feature for artists that borrows from the popular social sharing format in Snapchat and Instagram. The app developers have also been experimenting with podcast recommendations.