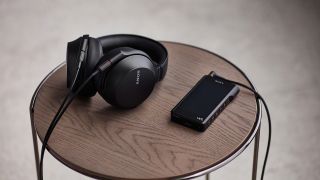 Sony surprised the crowd at the Rocky Mountain Audio Festival (the biggest high-end audio festival in the US) when it unveiled a slew of premium audiophile products – including a massive pair of 70mm over-ear headphones and a $8,500 music player.

The headphones, called the MDR-Z7M2, are a sequel to Sony’s previous premium cans, the Sony MDR-Z7. These premium cans have a claimed frequency response between 4 Hz - 100,000 Hz (you know, only five times what the human ear is capable of hearing) thanks to an aluminum-coated liquid crystal polymer diaphragm.

Of course, great headphones are only half the battle – the other half is having a great player and great source material. Thankfully, Sony also unveiled a new $8,500 (around £6,500, AU$12,000) music player that is, perhaps, the very definition of the word overkill.

And yes, the volume knob is gold-plated.

While the headphones will be available starting in November 2018, the DMP-Z1 won't be available until January 2019 and only then through authorized Sony dealers.