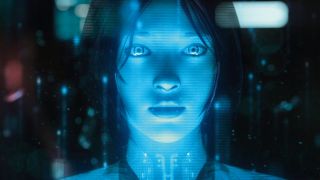 Leaks have revealed much about the Siri rival with a name taken from Halo, and now new details of just how Cortana will fit into the Windows Phone-verse have emerged.

According to sources of The Verge, Cortana is set to replace Windows Phone's built-in Bing search feature.

To users, Cortana will appear as a circular animated icon the color of their chosen Windows Phone accent color. Look for a personality similar to Siri and data pulled from resources like Bing, Foursquare and elsewhere to give Cortana Google Now-esque contextual awareness.

Cortana won't just be a stagnant ball of data. She will reportedly become animated when speaking or contemplating queries, and depending on what you ask her, Cortana will bounce about or frown with "emotion." We can only imagine what sort of questions would make her bounce...

The option to have Cortana greet users by name, ask if they need help or field questions in a Siri-like fashion are also apparently part of Cortana's charm.

Reportedly at the heart of Cortana is a Notebook feature that acts as a sort of privacy layer between assistant and user. Users will be able to control what's shared with their Windows Phone personal assistant, including info on location, behaviors, personal and contact information and reminders.

With Notebook in place, Cortana won't be able to access information willy-nilly. She'll learn about users, but won't store anything unless given the OK. Users will have the power to edit and delete anything that's been stored.

Whatever data Cortana keeps will then be used to answer search queries (put in by either voice or text), and assist in providing suggestions, alerts and reminders.

As time goes on, Cortana will learn more about her Windows Phone bosses, tuning into searches and what folks are up to on their phones. If you let her, Cortana will tuck things like home and work addresses and general interests inside Notebook.

When a message comes through with a phrase containing certain information - "let's meet tomorrow at 8 p.m.," for example - Cortana will ask users if they want to perform certain actions, such as setting up a reminder for the rendezvous.

Like iOS, Cortana is said to have do-not-disturb management prowess, granting her the ability to mute certain notifications. She'll know who's in a user's contact "inner circle" and will manage notifications or calls from them accordingly.

As if she didn't do enough already, Cortana will reportedly relay contextually based guidance on things like the weather, stocks, directions, appointments and music.

We'll see if Cortana makes it to the final public release of Windows Phone 8.1, and if it does, how well she recognizes and comprehends voice commands. As The Verge noted, Microsoft will eventually need to bring third-party apps into the fold as well as Windows and Xbox if Cortana has hope of improving over time.

We should learn more about Windows Phone 8.1 and Cortana at Build 2014.