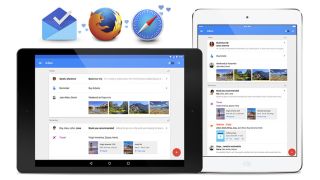 Many folks are still scratching their heads wondering why Google felt the need to create an entirely separate Gmail client for mobile devices late last year, but few could argue the search giant is moving quickly to improve that product.

The Official Gmail Blog today announced a couple of big enhancements for its fledging Inbox by Gmail app, which debuted back in late October on iPhone and Android smartphones.

There was just one problem: Inbox by Gmail was limited to smartphones and Chrome web browsers, at least until now.

With a free update to the mobile app now available from Apple's App Store or Google Play, tablet owners can now see what all the hype is about, now that the Inbox by Gmail app works natively with the iPad and a wide range of Android-based slates.

Perhaps more importantly, Google has lifted its self-imposed restriction that limited Inbox to its own Chrome web browser, and Safari and Firefox users also now get a taste of a whole new Gmail experience.

One thing unfortunately hasn't changed: Google is still limiting Inbox by Gmail access to users with an invite, although the company has gone out of its way to make sure everyone who wants one can do so, offering extra invites to existing users that can be shared with friends.

Those without already connected friends (or possibly lacking friends of any kind) can instead send an email the old-fashioned way to inbox@google.com and politely request to be added to the invite list.