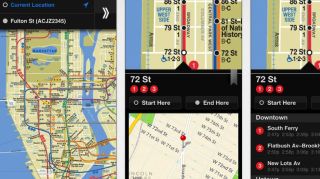 Embarking on a new Maps path

If you're sick of the blue dot of directional death emanating from your Apple Maps, relief (in some form) may soon be on its way.

Apple was light on specifics, but confirmed the deal to Lessin with its standard "we buy smaller companies from time to time, but we won't tell you why or what we're going to do with them" line.

We've asked Embark and Apple for comment, and will update this story when we hear back.

Lessin noted Embark built apps for both iOS and Android, however now there's no sign of an Embark app in the Google Play Store. What's more, its website only lists 10 public transit information apps that are available in the Apple App Store.

Show me the way

Apple has infamously dealt with a radically inadequate mapping experience ever since it ditched Google's nav services in iOS 6. One of the major complaints when Apple launched its own Maps was a lack of public transportation information.

CEO Tim Cook admitted the failure of Apple Maps in September, and Cupertino has since embarked (sorry) to patch the issues, including purchasing a smattering of map-related services.