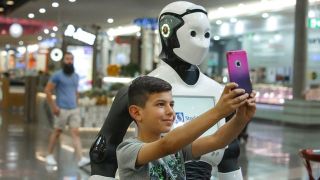 There are a lot of robots in the world. Mostly they live in factories, but they're increasingly making their way into everyday life - and there are some big decisions on the horizon about how we'll safeguard certain parts of our way of life as they do so.

Now, a team of roboticists at the University of California, Berkeley, has developed a simulation that indicates that adding some self-doubt to robots could help them better integrate into society. The big question is: how much?

"It is clear that one of the primary tools we can use to mitigate the potential risk from a misbehaving AI system is the ability to turn the system off", the researchers wrote in a paper published on the pre-print arXiv server.

"As the capabilities of AI systems improve, it is important to ensure that such systems do not adopt subgoals that prevent a human from switching them off. Our goal is to study the incentives an agent has to allow itself to be switched off."

The simulation they created depicts an interaction between a robot and a human with an adjustable level of self-confidence for the robot, which has a built in off-switch.

The wishes of the human

In one simulation, the robot was asked to perform a task, and a human was then given the option of allowing it to continue or hitting the off switch. But the robot also had the ability to override its own off-switch and therefore the wishes of the human.

As you can probably expect, robots that had a lot of self-confidence turned themselves right back on. When they were given just a little confidence, however, the robot stayed off - even if it judged that it was doing a good job.

They added: "This is far from the end of the story. In future work, we plan to explore incentives to defer to the human in a sequential setting and explore the impacts of model misspecification."