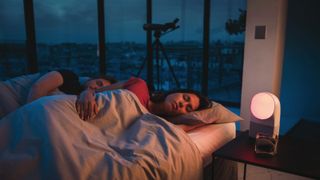 It's quite nice to curl up in bed with your phone and check Facebook just before you doze off. But unless you've configured your device to adjust its screen color when the sun goes down, it'll likely mean a worse night's sleep.

That's the conclusion of a new study published by researchers at the University of Houston's college of Ophthalmic and Physiological Optics. They found that the blue light emitted from the screens of digital devices can contribute to the high prevalence of sleep dysfunction reported in modern society.

The team, led by Lisa Ostrin, recruited 22 volunteers aged 17 to 42 who were asked to put on special glasses three hours before bedtime for two weeks, while still performing their normal digital routine. The glasses were tuned to block blue light. They also wore activity and sleep monitors.

The results showed that wearing the glasses boosted nighttime levels of melatonin - a chemical that tells your body it's sleepytime - by 58 percent. That's more than the boost that you tend to get from melatonin supplements that are commonly used to combat insomnia.

The study participants also said that they slept better, fell asleep faster, and their sleep duration was boosted by 24 minutes per night.

“The most important takeaway is that blue light at night time really does decrease sleep quality.” Ostrin said.

The reason is that blue light is used by our body to regulate its internal clock. Blue wavelengths activate photoreceptors that suppress melatonin production and have the excellent name "intrinsically photosensitive retinal ganglion cells". When your phone is giving off blue light, it fools the body into thinking it's daytime.

But there's actually settings built into most newer devices that reduce the amount of blue emitted by their display - iOS has Night Shift, while Android 7.0 has Night Mode. On laptops and desktop computers, as well as tablets running Windows, you can download a free app called f.lux.

The full details of the study were published in the journal Ophthalmic and Physiological Optics.