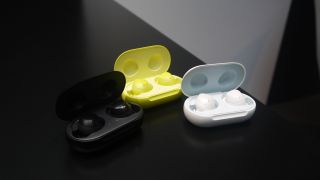 We're expecting to see upgraded versions of the Samsung Galaxy Buds debut alongside the Galaxy S11 in February 2020, as rumors (and precedent) suggests, but they might not be the AirPods Pro rival we were hoping for – or even much of an improvement on the originals at all – based on a new leak.

The information comes from prolific tech leaker @UniverseIce who suggests that the new and upgraded true wireless earbuds might not have noise reduction or noise cancelling.

That's a big feature it'd be missing out on, which some of the Galaxy Buds Plus' most prominent rivals (like the aforementioned AirPods Pro) pack, so Samsung's earbuds may suffer for this loss.

Apparently there are general improvements for battery life, charging speeds and audio quality, which fix problems that didn't actually exist in the original buds. In general, though, it doesn't seem like there are any new features here of note, as noise cancellation, or at least noise reduction, is one of the most important features for headphones.

That doesn't mean future Samsung Galaxy Buds won't come with the feature – these are being called the Buds 'Plus' not Buds '2' so it's possible they're intended only as a slight upgrade to replace the older earphones, and not a completely new product.

Still, with the original Samsung Galaxy Buds being pretty good value these days, often with decent price discounts in sales, we're not sure who'd want to buy these newer buds.

Of course, it's worth bearing in mind that this information has come from one leaker, so it could turn out to be incorrect. We'll know for sure come February 11, when Samsung Unpacked will bring us the new generation of Samsung mobile products, including (we're expecting) the Galaxy S11 (or Galaxy S20, as this same leaker suggests it's called), Galaxy Fold 2, and Galaxy Buds Plus.