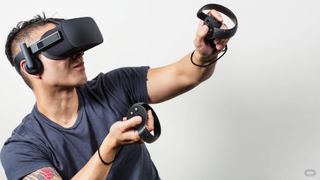 UPDATE: Facebook has announced that the Oculus Rift will drop back to a price of US$499 after the sale finishes toward the end of August (although the price will likely be higher once you include international shipping, so don't miss out on the sale if you're after a headset).

Since launching in March 2016, the dedicated headset from Facebook’s VR division hasn’t seen a reduction in price anywhere close to the drop we’re seeing at the moment. The official ‘Summer of Rift’ sale is, according to Oculus, “all about celebrating the VR community and encouraging new people to get into the game”.

For Aussies that have been sitting on the fence, that actually means now's the best time yet to buy the Oculus Rift, with a summer sale in the US reducing its price to US$449 including delivering to Australia. This brings the cost down from over $1,000 Aussie dollars to around the $600 mark — but this one is definitely a limited time offer, so we'd suggested jumping on it while it lasts.

Of course, you'll also need to have a VR-ready PC to power it, but the Rift kit otherwise comes with everything you need to kick off into virtual reality, including the headset, two sensors, touch controllers, Xbox One controller, remote, necessary cables and a bonus seven free VR titles to get you gaming straight away.

We’re unsure if this sale is indicative of the current status of Oculus VR, with the company having to pay US$500 million in a lawsuit to ZeniMax earlier this year and its founder and creator Palmer Luckey leaving soon afterwards, or if it truly is a celebration of VR's success.

Either way, if you've wanted to try out VR on your PC without spending a small fortune, this is the best option yet.