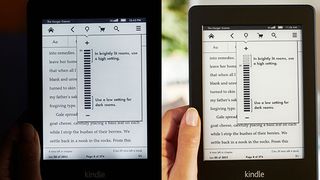 Amazon has released a statement clarifying some of the limitations of its new Kindle Paperwhite e-reader.

The online retailer says that the illumination offered by patented built-in light, a key feature of the new device, is "not perfectly even," after some reviewers and users pointed out the discrepancy.

Amazon has served-up pictures of how the illumination can appear different, with darker patches appearing near the bottom, when using the Paperwhite in poorly-lit reading environments.

"These variations are normal and are located primarily in the margin where text is not present," said Amazon, which announced the device for the UK market on Thursday.

"The illumination is more even than that created by a book light or lighted cover. The contrast, resolution and illumination of the Paperwhite display is a significant step-up from our prior generation."

Amazon continues to claim that the Kindle Paperwhite is the "best Kindle we've ever made by far," largely thanks to the new 6-inch dsiplay, which offers 62 per cent more pixels and 25 per cent better contrast

However, it is also missing some familar features and boasts only half the storage available on legacy devices. Amazon has also explained the reasoning behind these omissions in its statement

The company wrote: "Kindle Paperwhite does not have audio or Text-to-Speech. This makes the device smaller and lighter than it would otherwise be. Audio and an improved Text-to-Speech engine are supported on Kindle Fire and Kindle Fire HD.

"The Kindle Paperwhite has 2 GB of storage. Some previous Kindle models had 4GB of storage. 2GB allows you to hold up to 1,100 books locally on your device. In addition, your entire Kindle library is stored for free in the Amazon cloud, and you can easily move books from the cloud onto your device."

Meanwhile, Amazon has revealed that it makes zero profit on its Kindle hardware, and sells all devices at cost - a stark contrast to the policy Apple adopts for its portable devices.

CEO Jeff Bezos told the BBC: "We sell the hardware at our cost, so it is break-even on the hardware.