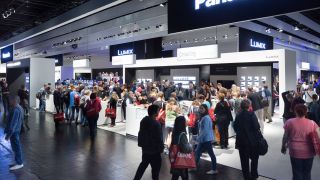 In 2017, the organizers of Photokina – the world’s largest photography show – announced the biennial event would become an annual occurrence starting in 2018. It was also decided to drop the number of event days from six to four.

After Photokina 2018 was done and dusted in September, it was decided that the event would move to a May cycle, with the next show scheduled for May 2019. That decision, however, has now been changed.

According to the organizers, seven months between the two events is not enough time for participants to develop concepts and products to put on show, and have decided to move the event to May 2020.

“The decision to postpone the start of the announced annual cycle by one year is intended to give all participants the opportunity to further develop the new concept for Photokina and to tap into new target groups among exhibitors and visitors in order to heighten the status of the trade fair as a global platform for the photography and imaging industry,” reads the announcement.

Organizers say Photokina 2018 “exceeded expectations” with “180,000 visitors from 127 countries”. With the “bar set very high for the next event”, it is feared that seven months between events won’t allow them to “create the same enthusiastic atmosphere that characterised Photokina 2018”.

While the attendance number sound impressive, a report suggests it's down from 191,000 at Photokina 2016. That was possibly because some participants wouldn’t have wanted to go through the entire process of travelling to Cologne, Germany, and booking a spot within seven months.

If you were all set for Photokina and are now at a loss of what to do for you camera show fix, fear not. Dates for The Photography Show 2019 have been announced and is the destination event for all image creators.

Whether you're a seasoned professional, a keen enthusiast or you've just been bitten by the photography bug, you'll want to head to the Birmingham's NEC on 16-19 March 2019 to be inspired by a host of experts, learn new photography and video techniques, get hands-on with the latest kit and find fantastic deals.

The show is brought to you by Future Plc, the publishers of TechRadar, and it's an unmissable date in the diary for anyone looking to take the next step in their photography journey.