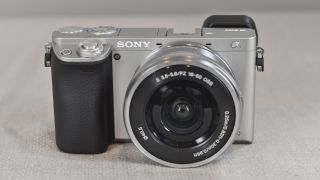 Sony claims the Alpha 6000 has the fastest AF system of any APS-C format interchangeable lens camera.

Sony has launched a new camera to sit in its Alpha range of compact system cameras.

The A6000 sits in the same kind of slot as the Sony NEX-6, which has now been discontinued. The A6000 doesn't feature the NEX name as Sony has taken the decision to drop that branding.

The Sony NEX-7 has also been discontinued, with Sony hoping that those customers will be opt for with the new Sony A7 and Sony A7R.

Featuring a 24.3 million pixel Exmor APS-C sized HD CMOS sensor, the key selling point of the camera is speed, with Sony claiming the world's fastest autofocusing speed amongst interchangeable lens cameras with an APS-C sized sensor - an accolade which was previously claimed by the Fujifilm X-E2. That 0.06 second speed has been CIPA verified.

Powered by Sony's hybrid AF system, the a6000 features a 179 point phase-detection AF sensor which is combined with 25 contrast detection AF points. The camera is also capable of shooting at up to 11fps.

A three inch LCD screen is joined by an OLED Tru-Finder EVF, while many of the buttons on the camera are customisable to different functions depending on the way you like to work.