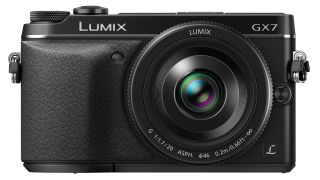 The camera features a new 16 million pixel sensor, which Panasonic claims is "far beyond anything we have launched before" and can compete with larger (APS-C or DSLR format) sensors in terms of low light shooting.

A new Venus processing engine is also part of the package, which should help with noise control in low light shooting conditions.

Coming just a couple of months after Olympus revealed its top of the line Olympus PEN E-P5 compact system camera, the Panasonic GX7 features a magnesium body and will be available in a retro black and silver, as well as in an all-black model.

A range of other high-end features are also included on the Panasonic GX7, such as inbuilt Wi-Fi and NFC technology, a 1040k-dot tilting LCD screen, 1/8000 second maximum shutter speed and focus peaking.

Unlike the Olympus PEN E-P5, the Panasonic GX7 has a built-in viewfinder, which can tilt up from the body for composing from above. This 2760k dot device is designed to sit relatively flush to the body.