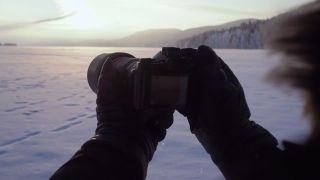 We spoke to Janne Tarvonen, New Media Designer/Producer at KAUAS to find out more about the video, how it was made and how they got on with the OM-D E-M5 Mark II. He told us the whole video was shot handheld, without using any rigs or external stabilisers – and he had lots of other great insights too.

Where was this filmed and how cold was it?

JT: The filming took place in Koli National Park, Finland. It was around -20-25 degrees celsius.

Some of the scenes are shot in really low light, so how did the camera cope with that?

JT: In low-light scenes ISO800 was the maximum usable ISO. In better light conditions we were able to use ISO1600 when exposed right. We had also few lights with us which was helpful.

Did you use AF or manual focus or both?

JT: We used both. Manual focusing was easy with focus peaking and autofocus worked pretty well when shooting moving objects. We even shot some scenes with a 300mm focal length and lots of movement in the picture. The autofocus worked really well here, especially the scene where the snowmobiles are moving down from the hill.

Did you do any comparisons with the stabilization and without it?

JT: We shot mainly with the stabilizer on because all the shots were done handheld. It worked really well with small and bigger movements. We did a stabilisation test before the trip and didn't change the settings after that.

JT: Manual exposure. The buttons and functions in manual mode were positioned in good places and even with thick winter gloves we were able to use the buttons. One disappointment was that the changing the shutter speed or aperture was not possible during recording. We didn't experience shooting with auto exposure and we don't believe that not many professionals would use that.

Any comments about the camera and the things you like about it from a videographer's point of view?

JT: The stabilizer is a game changer really. It doesn't only work in big movements like when following the subject by walking, but also in small movements like doing really small pulls and pushes [moving in and out] with the camera. The stabilizer gives so much freedom in run-and-gun style shoots where you can't really carry a lot of gear with you. This really isn't a low light camera, but in good light conditions the image quality is competitive. Also the 77 Mbps bitrate gives surprisingly good results when you do color grading [color matching/correction] later on. We think that well done 1080p is much better choice than second-rate 4K.