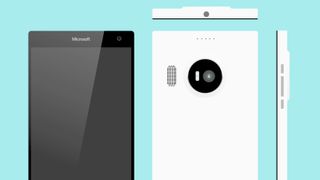 Windows Hello and support for the Surface Pen could be headed to Microsoft's upcoming flagship devices. We recently reported on the specs rumored to be stocked in the Lumia 950 and 950 XL, and now, it's looking like some of those specs could clue us into how Microsoft is planning to unify its mobile and desktop experiences in Windows 10 Mobile.

Windows Hello is an iris-scanning feature built into Windows 10 that allows users to log-in without a password, just a camera. Microsoft showed it off on desktop earlier this year, but this is the first that we're hearing of it being baked into the mobile flavor of the OS. This front-facing camera's infrared functionality, if the rumors are true, could allow users to speed up the cumbersome process of signing into their devices. It would also be a safer alternative to typing in a PIN or using a fingerprint scanner.

Next up is Surface Pen, which is a feature that's at the heart of what makes using tablets like the Surface 3 and Surface Pro 3 a unique experience. In a move that would please business types, as well as artists and note-jotters, the Lumia 950 and 950 XL could be stocked with support for the Surface Pen.

The device render above for the Lumia 950 XL, codenamed "Cityman," was whipped up by Windows Central. It shows the 5.7-inch device and what might be its iris-scanning camera in the corner. While we don't know what the Lumia 950, AKA "Talkman," will look like, the size reduction to a 5.2-inch screen could just mean a miniaturized XL, a la iPhone 6 Plus and iPhone 6.

Windows fans, do these specs satisfy you? If the rumors are true, the Lumia 950 XL and even it's lil' bro, the 950, could give the competition a jolt. Heck, I'll just be happy if these Windows 10 Mobile phones are more than just reskins of popular Android phones. (We're looking at you, HTC One M8 for Windows.)