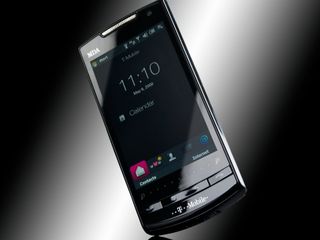 T-Mobile has today launched the MDA Compact V, the latest in its MDA range manufactured by HTC, with its customised set of widgets and Sat Nav thanks to a tie-in with CoPilot.

It houses a 5MP camera, a full 3.2-inch touchscreen and Windows Mobile 6.1, with the upgrade coming later this year to WinMo 6.5, via sideloading from the PC.

The screen is a WVGA offering with 800 x 480 resolution screen, which gives pin sharp video and internet viewing.

T-Mobile has added in a widget screen to the TouchFlo interface where users can put pre-defined widgets to the likes of BBC and eBay, or add their own links in too.

There's also a link to the TV portal which gives the chance to subscribe to the likes of Sky over a mobile internet connection (which comes in at a healthy 7.2mbps HSDPA speed).

The CoPilot offering, which comes with a seven day trial, will also be free for 18 months to the first 10,000 to sign up to the phone, but only those that do so from 1 June, with the people before that date sadly missing out.

T-Mobile has also added in its own multi-platform IM client, so users can chat via the likes of G-Mail, AOL, Yahoo! Messenger or MSN Messenger if they so wish.

Essentially a Touch Diamond 2 with a T-Mobile makeover, it retains similar dimensions to the original device but dispenses with the metal shell and adds a curved bottom edge.

T-Mobile was also keen to show us that the back was now matt plastic rather than the fingerprint-toting shiny layer, and a 'stylish' metal bar inserted next to the camera.

Available from the 21May in the UK, the phone will be free on a £50 18-month contract and comes bundled with a 2GB card.

While T-Mobile has certainly added some value to the Touch Diamond 2, Orange offers the original phone (which has performed very well in recent tests) for only £40 a month, without having to pay for the handset, with more carriers coming online soon.