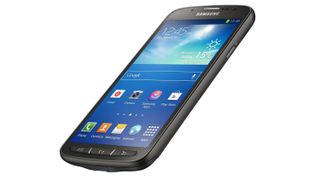 Friends can now push you into the pool without worrying about damaging your phone!

Looking to get a Galaxy S4, but afraid to take it on your next trip to the beach? Samsung Australia has confirmed that it's dust and water resistant Galaxy S4 Active will make its way to Australian shores later this year.

The differences between the Galaxy S4 and the Active model boil mostly down to small differences in aesthetics. About 20 grams heavier, the Active is a little taller and wider, with physical buttons on its front.

The screen is swapped from the Super AMOLED panel to a touchscreen TFT display and that while the camera has been downgraded to 8 megapixels from the original's 13-megapixel count, the camera is able to capture photos and videos using the "Aqua Mode".

Rated at IP67 standards, the handset will be able to take a dip in the water to one metre, for about 30 minutes.

Sadly, exact pricing and availability dates have not yet been confirmed yet, but given Australia's harsh environment, we expect it to sell bucketloads.

Rugged tech not your thing? Why not try some other blips over here.