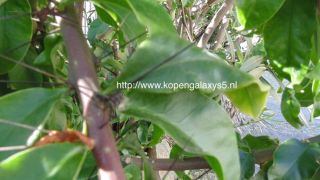 Is this our first glimpse through the lens of the S5 Zoom?

Update: Hold up - all is not what it seems. TechRadar has been flagged a Flickr page of a remarkably similar looking image, although the EXIF data here suggests it was taken with a Sony DSC-H200 camera in January.

Of course there's no guarantee the EXIF data on this post hasn't been faked, but it does raise suspicions of foul play.

Thanks to Krzysztof for the tip.

We're getting a pretty clear picture of what to expect from the Samsung Galaxy S5 Zoom when it comes to its design, but this is a phone that's all about the photos.

That's why we're particularly intrigued by a new image doing the rounds which was supposedly shot on the S5 Zoom.

The photo was sent to Dutch site KopenGalaxyS5.nl with an EXIF tag of SM-C115. The Samsung Galaxy S4 Zoom is the SM-C101, so that's close enough that it's likely to be its successor.

The photo is a close-up of some leaves and, well, it's hard to make any firm conclusions based on a single image, but it certainly seems reasonable quality, at least by smartphone standards, though the background is more in focus than the foreground.

From previous rumours we're expecting the Samsung Galaxy S5 Zoom to have a 20 megapixel sensor, 10x optical zoom, a 4.8 inch screen and a significantly smaller footprint than last years model.