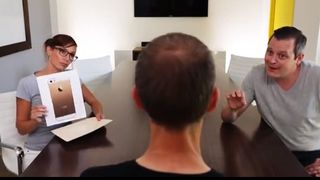 UPDATED: Microsoft has released a statement saying it pulled the ad because it was "wide of the mark"

It reads: "The video was intended to be a light-hearted poke at our friends from Cupertino. But it was off the mark, and we've decided to pull it down."

Making fun of Apple is approaching shooting-fish-in-a-barrel territory for the company's rivals, but in a break from the norm, Microsoft's latest effort is actually kind of humorous. Who'd have thunk it?

The clever, two-minute parody video does a pretty decent job of taking the mickey out of Apple's newly-launched iPhone 5C and iPhone 5S handsets, in a fly-on-the-wall style video.

The killer line? "And you know what the beauty part is? We can charge whatever we want, bro!"

The video, which has been taken down by Microsoft, probably by design, continues to exist on YouTube and ends with the hastag #timetoswitch.

It's by no means the first time Microsoft has assumed the position as chief Apple agitator, it's recent Windows 8 vs iPad commercials have had their moments too.

Will it encourage people to switch to Windows Phone in the same way Samsung's Next Big Thing commercials helped the company shift more Galaxy handsets? Probably not.

You can enjoy the latest clip below.