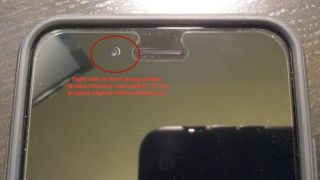 The issue is visible, but purely cosmetic

You'd think the iPhone 6 couldn't catch a break, at least until you look at sales numbers, as following BendGate and software bugs users are now reporting issues with the front-facing camera.

Various posters on Reddit, Macrumors and other forums claim that their iPhone 6's selfie camera has become misaligned with its housing, causing a grey crescent shape to appear at the edge.

It's worth noting that this is a purely cosmetic issue, and a fairly minor one at that. Pictures still come out fine, which is arguably the most important thing, but it's still undesirable on a shiny new piece of expensive technology.

The complaints seem to be focused purely on the iPhone 6, with the iPhone 6 Plus seemingly remaining unaffected and it's not clear how widespread a problem it is, but if your phone is affected you should be able to get it fixed or replaced.

While there has been no official response from Apple yet various redditors claim to have got either a new display or a whole new device when they brought it into an Apple Store and one poster who claims to be an Apple Store employee said that they don't know why the cameras shift, though presumably it's something that Apple is or will be looking into.