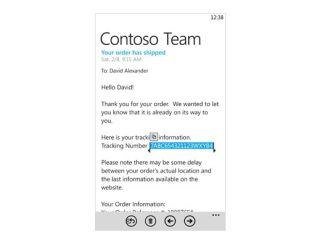 A sneak peek at WP7's upcoming copy and paste function

Microsoft has outlined the features we can expect to see in an imminent update to its Windows Phone 7 mobile OS.

The company hinted that a big update would be coming to Windows Phone 7 in early 2011, bringing copy and paste functionality with it.

It seems that using copy and paste on the touchscreen handsets will be a breeze, and very similar to the interfaces on iOS and Android handsets. Simply tapping a word then sliding you finger will highlight text, then it's as simple as hitting the copy icon, navigating to where you want to paste, then tapping 'Paste'.

More than just copy and paste

Although not as "massive" as we'd hoped, Microsoft does have a couple more things up its sleeve for the eagerly-awaited update.

The company claims to have "whittled down" the time apps and games take to start and resume, although details on how they've done this are scarce.

The Marketplace has also had a bit of work done, with the search function fine-tuned to show you results only from the section of the market you've searched from; so if you're in Music and hit search, it will only show you results from the music catalogue.

The over the air update is scheduled for the frustratingly vague time of 'soon', although we wouldn't be entirely surprised if it happened to coincide with Mobile World Congress 2011 next month.