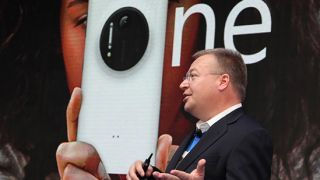 "Look guys, we can't all be Samsung"

The former CEO of former phone company Nokia, Stephen Elop, has explained more behind the company's various controversial decisions over the past few years in an online AMA.

The biggest of these was to sell Nokia's device and services division to Elop's former employer Microsoft in a deal that closed last week - Elop predictably denied that he was a Trojan horse sent in by Microsoft to groom the company for a quick and dirty sale.

But amid the marketing speak and PR scripted answers, he did have some interesting tidbits to drop.

Elop revealed that Nokia chose Windows Phone back in 2011 because it was wary that "a decision to pursue Android would put us on a collision course with Samsung, who already had established a head of steam around Android."

Turns out Elop thinks that was the right decision because he sees other Android-makers struggling now: "We have seen virtually all other OEMs from those days pushed to the side." Not like Windows Phone makers, eh?

The company did eventually make an Android phone - the Nokia X - but as a budget solution rather than a high-end flagship.

He also explained that the company retired Symbian and other internal OS projects like Meego because they couldn't compete with where the iPhone was already at:

"Back in late 2010 and 2011, we carefully assessed the state of the internal Nokia operating system efforts. Unfortunately, we could not see a way that Symbian could be brought to a competitive level with, for example, the iPhone that had shipped THREE years earlier!

"And the Meego effort was significantly delayed and did not have the promise of a broad enough portfolio soon enough. We had to make a forceful decision to give Nokia the chance to compete again."

As for his time at Nokia, Elop credits his controversial "burning platform" memo with reinvigorating the whole company and its efforts on Windows Phone.

"It's hard to comment on what came before, but I do know that the "burning platform" galvanized the mindset of thousands of employees with the recognition that we faced a critical situation," he said.

"We brought urgency into the organization and within 6 months we produced our first two Windows Phone devices. This was faster than we had ever gone before and marked the beginning of our cultural change."