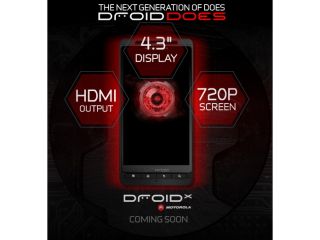 The Motorola Droid X - the latest Next Big Thing in the Android world - has officially broken cover in the US.

The new phone is very similar to the Milestone XT720 we were treated to recently - which means it possibly won't make it to the UK.

We assume the latter means it can pump out HD content to TVs, as a 1280x720 screen at this size would be frankly ridiculous.

There's no more official word on specs as yet, but it's got an HDMI-out port, which means it's likely to record in HD; again, like the Motorola Milestone XT720.

We'll keep an eye out to see if this little gem drops over here, but don't get your hopes up too much - save all that for the Motorola Milestone 2 instead.