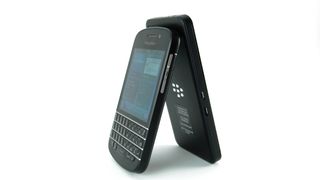 BlackBerry can't prop itself up anymore

If we had to sum up this week in sounds, we'd choose two. One would be a sad clown playing an out of tune piano being thrown down a stairwell, and the other would be a high-pitched whooshing sound.

The sad clown noise comes from Blackberry, the once-proud smartphone giant that's just put itself up for sale.

The official phrase is that a special committee will "explore strategic alternatives to enhance value and increase scale", but realistically Blackberry is standing on the high street offering three pairs of socks for a pound.

How did it come to this? Gareth Beavis knows: "If you don't move with the times, you'll be overtaken and consumed by technological vultures feasting on the juciest bits of your once-cutting-edge carcass." We know, we know, that's pretty dark. You should have seen the stories he wrote in primary school.

It's easy to blame the iPhone for Blackberry's demise, but the problems go back further: the 2002 Quark combined calling and email, and while it was "the future" it was "also the company's downfall".

"The mantra 'if it ain't broke, don't fix it' must have been emblazoned on the walls," says Beavis: RIM (as it was then known) "eschewed 3G, took ages to add cameras or Wi-Fi to its devices and even managed to mess up the touchscreen when it finally tried to rival the iPhone with the Blackberry Storm."

Blackberry is a company packed with talent, but all too often its timing sucks.

It's not that Apple is in trouble, it's that the world is impatient

Guess who else is supposedly in trouble? That's right: Apple, because nothing says "disaster" like being the most valuable technology company in the world. But there is trouble in paradise.

The board is getting jittery and Oracle CEO Larry Ellison reckons history will repeat - "we saw Apple with Steve Jobs, we saw Apple without Steve Jobs," he says. But billionaire investor Carl Icahn says Apple is "extremely undervalued."

Who to believe? Kate Solomon agrees that "Jobs is a tough act to follow," but Tim Cook should ignore calls to do something fast. "No," Solomon counsels. "Do something great." It's not that Apple is in trouble, it's that the world is impatient.

"Like you, I want magic," Solomon says. "At any tech launch, I'm hoping for something that will cause my eyes to widen and an involuntary "Oh wow!" to slip out. I want it to do something useful, I want it to work perfectly, I want it to look gorgeous and I want it to be awesome. And hey, that's going to take a bit of time."

Something else that's taken a bit of time is Windows 8.1, but it's nearly done now and you'll be able to get it in October. The cunningly named Windows 8.1 will hit Windows Update in October, and Microsoft hopes it'll boost interest in Windows 8 systems.

We hope so too: Windows 8 hasn't been the stimulus the PC industry hoped for, and news stories about Windows RT increasingly sound like broadcasts from the deck of the Titanic.

And the high-pitched whooshing sound? That's Elon Musk's Hyperloop, which may be the future of travel, a billionaire's folly or a really effective way of turning humans into pink mist.

As Michelle Fitzsimmons explains: "One day years from now you may find yourself sitting snugly in a tube, hurtling from San Francisco to Los Angeles at 800 miles an hour."

There's just one problem with Musk's idea. He isn't going to build it. He's too busy exploring space and stuff, "so don't expect to be whizzing down tubes to visit your granny any time soon," says Duncan Geere. "But by the time you're a granny? Don't rule it out."