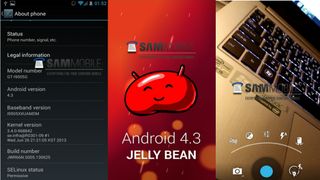 There appears to be more evidence that Android 4.3 is nigh, with some leaked screenshots purporting to be of the new Jelly Bean OS.

The screenshots show 4.3 running on a Google Play edition of the Samsung Galaxy S4 - GT-i9505G to be exact - from an insider with early access to the software.

The images were obtained by SamMobile, which claims that 4.3 will officially roll out next month, though Google is still keeping quiet on the update.

The Galaxy S4 Google Edition is part of the Nexus scheme, alongside Google devices the Nexus 4 and Nexus 7, which means they're first to receive Android updates.

Going by what looks like it will be a simple update, rather than an overhaul of the Android OS.

It appears that the camera app has seen the most radical change, shifting from a circular menu to an arc towards the bottom of the screen. We'll keep you updated with any further developments as they appear.