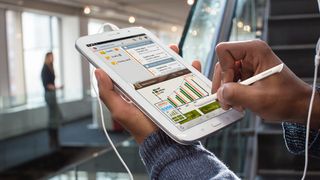 We explain why the S Pen is mightier than the sword

At least it is when it comes to the Samsung GALAXY Note 8.0.

With its pressure sensitivity and smart feature-set, we've got ten examples of S Pen beating the finger hands-down.

Air View was such a cool S Pen feature on the Note II, that Samsung decided to include it on the Samsung GALAXY Note 8.0.

Transforming your S Pen into something of a magic wand, Air View turns a hover into an input. Generally used to preview elements of the interface, it works in the gallery for example, as a means of peering into an album

Air View also works in the Video Player, with a hover over a point in the timeline popping up a preview of that specific frame.

The Samsung email app takes full advantage of the touch-free tech, previewing body copy of messages, while in S Planner, Samsung's calendar app, Air View gives you an insight into your agenda for any given day you hover above.

The Wacom digitizer inside the Note 8.0 is S Pen exclusive, detecting up to 1024 levels of pressure sensitivity.

Using the same technology as found in professional graphic design tablets, it gives the tablet some real creative credibility.

Why would you want a pressure sensitive tablet? Because, when combined with pen input, writing and drawing feel much more like the real thing.

The harder you press your S Pen on the screen, the thicker the stroke it makes. The S Pen actually supports the same degree of sensitivity found in Wacom's Intuos range of design tablets, the number one choice for most professional design studios – neat stuff eh?

What good is a swanky Wacom Digitizer without some apps to take advantage of it?

Samsung kits the Note 8.0 out with plenty of these, but none more fit-for-purpose than S Note. Supporting multiple note styles, S Note is perfect for a quick jot, doodle, mind-map or work of art.

With an extensive array of brushes and input modes, it's simple to navigate around and as fully functional as you need your 8-inch jotter to be.

There are a couple of quick commands on the Samsung GALAXY Note 8.0 that result in slicker S Pen input. These involve the S Pen button, so hold it down and lets get to it:

The first is related to the wonderful S Note we just spoke about. Double tap anywhere on the display with the S Pen button held down and you'll pop up an on-the-go Post-it style note for a quick bit of S Pen action. These are then saved in your S Note app for your convenience.

The next gesture involves a vertical motion up with the S Pen button held down. This opens a Quick Command dialogue box, where you can then enter a predefined symbol to do handy things like search the internet or send an email.

These symbols can be customised and you can even add your own new ones, breaking down the walls between your S Pen and gesture input.

There's nothing like a handwritten letter or email, and there's no finger that can match the precision of the S Pen in creating one.

The Samsung GALAXY Note 8.0's Mail app makes this nostalgic, heartfelt means of messaging possible. Once your new mail account is set-up, just open a new email, enter your recipient details, a subject, and then finally, tap on the handwriting icon in the toolbar.

Here, you can handwrite your well-wishes, complete with doodles, heart dotted 'i's or signatures for work related correspondences.