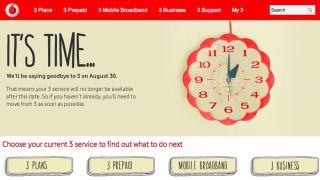 Following the merger of Vodafone and 3 back in 2009, customers still signed up to a 3 contract have been given a D-Day for transferring their contract before things get switched off. That day is August 30.

For 3 customers wanting to hang on to their number they'll need to switch carrier before that date, or risk having to get a whole new number.

It also runs alongside the end of the roaming agreement between 3 and Telstra, which is set to expire at the end of June

Vodafone expects only one per cent of remaining 3 customers will be impacted by the end of the roaming agreement with Telstra, but emphasises that 3 customers have been using Vodafone's network since August 2012.

Vodafone betting on a big year

While outgoing 3 customers are free to switch to any provider they want, Vodafone Director of Customer Care Cormac Hodgkinson is keen to point out the benefits of staying with Vodafone.

"3 customers have already been using the Vodafone network since August 2012, so all they need to do now is pick up a new Vodafone SIM and plan to continue to use their same handset and mobile number. We are working hard to ensure customers have a seamless experience," said Hodgkinson.

"It's a huge year for Vodafone. We've already seen the investment in our 3G network resulting in a significantly improved experience for customers. Last week we announced from July we will double our coverage in regional Australia. There is also a tremendous buzz and momentum around the imminent launch of our super fast 4G network," he said.

Given that the telco has continued to bleed customers despite improvements to its network, you wouldn't expect them to say anything less.