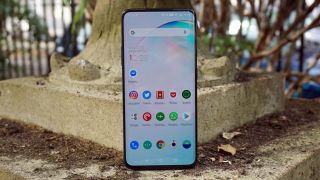 The OnePlus 8 Pro could have a punch-hole, unlike the OnePlus 7T Pro (above) (Image credit: Future)

We already expect at least some phones in the OnePlus 8 range to have a 120Hz refresh rate, but now, thanks to a leaked hands-on image of the OnePlus 8 Pro, we also know that the implementation is likely to be better than on the Samsung Galaxy S11 range, which is itself rumored to include 120Hz screens.

That’s because the image below, shared with true-tech.net by a ‘regular tipster’, suggests that there won’t be any restrictions to the resolution when put in 120Hz mode, whereas Samsung is rumored to be restricting users to an FHD+ resolution for 120Hz, with QHD+ only supporting 60Hz.

Of course, a 120Hz refresh rate coupled with a high resolution could make for a noticeable drain on the battery, and indeed this image notes that 120Hz will lead to ‘slightly reduced battery life’. But for those bothered by that there are also 90Hz and 60Hz modes shown.

So you should be able to find a good balance between decent battery life and smooth interactions with the phone – the latter of which is what a higher screen refresh rate gives you.

Beyond the refresh rate, the main thing to note in this OnePlus 8 Pro image is that there’s a punch-hole camera in the top left corner. This isn’t surprising, as we’ve seen renders of the OnePlus 8 Lite showing the same, but it’s further evidence that such a camera will be present, so you likely won’t get the pop-up lens and all-screen design of the OnePlus 7T Pro.

That might sound like a step back, but the pop-up mechanism is potentially fragile, and having to wait for a camera to rise also makes facial recognition less practical.

Of course, we’d still take all of this with a pinch of salt for now, as this leaked image might have been modified or simply be showing a different phone, but we’re not seeing any red flags. We should know for sure what the OnePlus 8 Pro will offer soon, as it’s likely to be announced in the first half of the year.