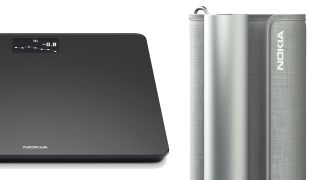 2017 has seen the surprising resurgence of Nokia, bringing new phones and now, a suite of connected health products to the market.

But before you go rushing to buy them, you should know that most of these products aren’t new, but what’s new about them might make all the difference. Each brandishes Nokia’s greatest weapon for beating back the competition, its name.

Earlier this year, we were told by co-founder of Withings Cedric Hutchings that by leveraging the Nokia branding and betting big on the future, companies like Fitbit have good reason to be worried.

And now, it’s finally showing a little force by launching rebranded versions of Withings’ products, including its Withings Steel HR, the Withings Health Mate app, the Withings Go and the smart thermometer, among others.

Today marks the launch of Nokia Body, an affordable Wi-Fi connected scale that can track weight, body mass index, total fat and how much water you’ve got in your system. At $59 (£55), it’s one of the cheaper smart scales we’ve seen.

It’s also bringing the Nokia BPM+ to market, which straps around your arm for a detailed look at your blood pressure. Interestingly, while being pinned as new, this appears to be a soft relaunch of a previous Withings product, albeit with some retouched design and of course, the household Nokia logo slapped on.

If you were hoping for a grand re-imagining of any specific product, you'll be disappointed. However, that doesn't mean it won't happen soon.

Where will Nokia go from here?

You can expect Nokia to continue in the connected tech scene where Withings left off, which was with an already-comprehensive suite of products.

In its first steps, Nokia has gone beyond health products, rebranding every single Withings product currently available, from the Home camera to the interesting and weird Hair Coach smart brush that we saw at CES 2017.

But now that there’s nothing left to put its name on, we look to Nokia to make moves to broaden the portfolio.

It’s possible that we might see it pull in other popular product types, like mesh routers and smart assistant-ready speakers. But one area where we fully expect to see some iteration is with wearables.

Withings was skilled at bringing high-end aesthetics and a good amount of utility to its wearables at a reasonable price and Nokia would be wise to continue down this path to get on as many wrists as possible.

The wearables market isn’t what it once was. The wrists of those who were interested at some point in a fitness tracker or smartwatch are spoken for, so if Nokia wants to change minds, it will need to think of something new, as nice as its rebranded Withings Steel HR does look.

Today’s step is a small, but necessary one that could very well put Nokia back on the tech map for the years to come.