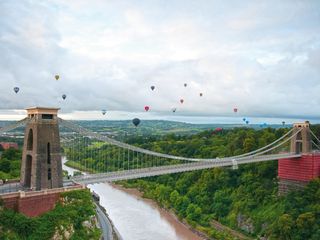 In the unlikely surroundings of Bristol's Windmill Hill City Farm - a community project half a mile south of the city centre - we found ourselves drinking coffee in a unique computer lab.

More than a lab, it felt a bit like a second-hand computer shop, with walls lined with shelving stacked with refurbished beige boxes waiting to be sold.

The workbenches, which formed the core of the lab, were lined with old thin clients donated from the NHS, while a repurposed P4 desktop to power them all sat in the corner.

Far from being symbols of an outdated project, though, this was just how those who built the lab envisioned it.

RECLAIM AND REPAIR: A healthy stock of second-hand computers waiting to go to those who need them most

We were guests at Bristol Wireless, the "social enterprise working to bring connectivity, computers and IT skills to all sectors of society". It's a project that's enjoyed great success over the past 10 years, and it's all been built on the back of Linux and free and open source software.

And it's not just a successful project, it's cool too: much of the equipment is homemade, it encourages learning and hacking, and it embodies the spirit of Freedom 2 of the Free Software definition - the freedom to share so you can help your neighbour.

When we first discovered it, through a comment on TuxRadar, we immediately wanted to find out more. The project was founded in 2002 as an off-shoot of the Easton Community Centre (ECC). For those unfamiliar with Bristol's geography, Easton is a vibrant and diverse inner-city area with community centres, cafes and pubs; it's also listed by the Government's Indices of Deprivation as one of the most deprived areas in the country.

One result of the deprivation is that the area was late to join the digital revolution. In a bid to help rectify this, in 2002 the ECC received a grant of £170,000 to build an IT centre to provide local residents with internet access. As part of this, a 2.2Mbps ADSL line was installed at the centre.

"It was a lot of money," explained Rich Higgs, one of Bristol Wireless's longest serving volunteers, "but they didn't really know what they were doing with it." It was 2002, and the dot-com bubble had just burst, so there were quite a few under-employed IT people in the area, including Rich and his friends who rallied around to help.

Their main focus was the new internet connection. It was a significant amount of bandwidth - few people had internet access, and nobody had anything faster than 512kbps - and they immediately recognised the impact such a connection could have.

Their first website, captured by the Internet Archive's Wayback Machine, on 24 November 2002, said: "By now we all know the benefits of computers, so far as education and research go. It would be a crime not to reach out and grasp these benefits, making them available to all."

BUDGET BUILD: Some of the equipment used to build the first wireless network, including a cantenna

They had no money to begin with, so all of the equipment was home-made - as the website explained: "A policy of lowest-cost solutions was rather rudely forced upon them." Although, as the website also notes: "This turned out to be a blessing in disguise as the project has become a study in conservation and the re-use of materials."

Their first piece of equipment was a series of 'cantennas'. These ingenious devices, otherwise known as 'tin can waveguide antennas', can significantly extend the range of a Wi-Fi connection for virtually no cost.

As well as being made of a tin can - the project found that a J&B whisky tin was the best solution - the only other components they require is a tiny and cheap connector and a bit of wire. Of course, as clever as the cantennas were, they were useless without the wireless cards to generate the signal, and the routers and servers to connect them to the ADSL line.

By this point, however, the project had begun to garner some attention from the wider Bristol community - as Rich recalls, it "had grown into something". The first wireless routers were made out of old PCs donated by the University of Bristol. The team stuck some wireless cards in these, installed Linux and put them to work as the routers on their new network.

Other donations, in the form of time and equipment, came from Psand, a local hosting and web development company. With all the pieces in place, the team turned on the network and, considering that all the equipment was home-made - some of it salvaged from bins in the city centre, it was an incredible success.

It stretched from the ECC, up the entire length of Chelsea Road, and could even be used in Whitehall - more than half a mile from the ECC. Given that most Wi-Fi networks have a range of just 300ft outside, that represents a nine-fold increase.

WI-FI TOILET: This toilet has the best Wi-Fi reception in the country

Andy Sabel, another volunteer, was working at the ECC at the time. He remembers a great deal of energy and enthusiasm surrounding the team: "These guys were around, ranting about Linux and doing interesting stuff." It was more than enough to excite local residents and non-technical ECC members.

After the network was turned on and working, the project started to take things further. They began setting up other key community buildings with the equipment to connect to the network, and with the computers they'd need to use it. In 2004, the project's website announced that: "After some initial problems… the installation at Greenhaven elderly residents' support accommodation is now up and running."

They managed to provide Greenhaven with two computers running Red Hat Linux, which were placed in a communal area and connected to the nascent network. This was just one of nine such installations that the project would carry out in short succession.

As these installations came online, and demand for access to the network spread to other parts of the city, the original infrastructure needed to be developed further. In particular, there was demand for the network to reach across Stapleton Road. This meant that the project needed to get an antenna on top of Twinnel House, a council-owned tower that would give them a direct line of sight to much more of Bristol.