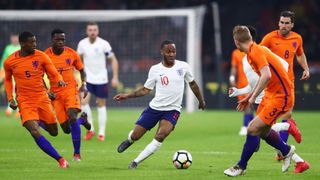 After a stunning first UEFA Nations League semi-final, can the second live up to the Ronaldo-based heroics from the night before? Tonight's showdown sees Gareth Southgate's young Lions take on the Dutch. Read on to find out how you can catch a Netherlands vs England live stream from anywhere around the world with our instructions below.

Netherlands vs England Nations League – where and when

The second 2019 Nations League semi-final is being held at Estádio D. Afonso Henriques in the northern Portuguese city of Guimarães. Named after the country's first king, the 30,000 capacity ground is the home of FC Vitória de Guimarães.

A revitalised Netherlands stand in the way of England claiming their place in the UEFA Nations League final.

Having failed to qualify for the last two major tournaments, and having lost to England last year in coach Ronald Koeman's first game in charge, the Netherlands are now resurgent. This is mainly thanks to an injection of youth throughout the side and the emergence of Ajax trio Frenkie De Jong, Matthijs De Ligt and Donny van de Beek who were instrumental in their club's run to the Champions League semi-final.

Much like the Dutch, England have been transformed under Gareth Southgate into a young side brimming with confidence. After last summer's heroics in the Moscow which saw them reach the World Cup semi-final, England overcame Spain and Croatia during qualifying to reach tonight's UEFA Nations League semi-final against Holland.

Which team will make it to the first ever Nations League final this Sunday? Find out by following the instructions below and grabbing a live stream of Netherlands vs England wherever you are in the world.

For those looking to watch the game in the UK, US and Australia, we've got your viewing options listed out below. And if you're out of the country for tonight's semi-final and are worried that you'll miss the game, relax. With the option of using a VPN service, you can tune into the match no matter where you are in the world. And best of all, it's really simple to set up.

A Virtual Private Network allows you to alter your IP address to one in your home country. From there, you can watch an online stream as if you were sitting back on your sofa.

We've tested hundreds of VPNs and can recommend these as the best VPN services currently available:

1. Express VPN (comes with a 30 day money back guarantee)
This is the #1 rated best VPN in the world right now. You can watch on many devices at once including Smart TVs, Fire TV Stick, PC, Mac, iPhone, Android phone, iPads, tablets etc. Check out Express VPN and get 3 months FREE with an annual plan.

3. IPVanish supports up to 10 devices, so great on the go. Focused on watertight security

How to live stream the England game in the UK

Despite the match being one of the most crucial England games in recent history, no free-to-air channels will be showing the game live.

That's because Sky has nabbed exclusive rights for all UEFA Nations League for the region. The tie will be shown by Sky Sports Football. That means if you're a subscriber you can enjoy the games on your TV (via Sky Sports Main Event) or on the Sky Go app for your mobile device.

For those without a subscription who still want to enjoy the action, Now TV offers a pay-per-month, week or day (£8.99) service that allows you to watch the games on your set top box, smart TV or mobile device all without a contract commitment.

If you're outside the UK, you can follow the VPN instructions above and access Sky or Now that way.

Expectations will be high, and the young Lions will go into the game as marginal favourites (according to Betfair) to reach the final against Ronaldo-led hosts Portugal. However, with seven key members of Southgate's squad having been involved in Saturday's Champions League final, will fatigue derail England's hopes?

Live stream Netherlands vs England in the US

If you're in the US, ESPN and Spanish-language channel Univision Deportes are your two options for watching Netherlands vs England live. If you don't have cable then you can tune in on streaming services such as Sling and Fubo (both of which have a free trial).

The alternative is that you could try and stream the coverage from another nation by grabbing a VPN and going from there. Be warned though, you may need a credit card from that country if you want to explore this option.

How to watch Netherlands vs England: Australia live stream

Having snapped up the rights to European internationals, you'll need to tune in to Optus Sport to watch live coverage of Netherlands vs England in the Nations League if you're down under. If you're not in Oz, using a VPN will allow you to watch the coverage on your Optus account.

Make sure you set an alarm though – kick-off is at 4.45am on Friday morning.