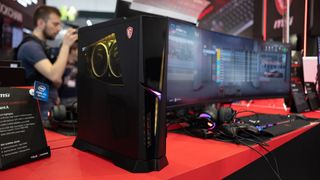 Computex 2018 is now in full swing, and MSI has shown off its upcoming slate of gaming-related gadgets.

We’re at Computex in Taipei, Taiwan, and have had a closer look at what MSI has announced, and what we’ve seen so far has impressed us a lot.

MSI has claimed it wants to make thin and light gaming laptops for mainstream consumers. Usually, a thin and powerful gaming laptop will set you back a whole heap of cash, but at Computex 2018, MSI has launched the MSI GF63.

This is a 15.6-inch laptop with a practically bezel-less screen, which keeps the size and weight of the device low – it weighs just 4.4 pounds.

MSI also revealed the Trident A Series compact desktop PCs. These are three times the internal volume of previous Trident PCs, and have been built larger to accommodate an internal SFX power supply and full length GPU.

For people looking for a slimline PC without an external power supply or having to stick with mini graphics cards, the larger size of the Trident A series will be a worthwhile compromise.

The new design also incorporates a glass side panel for showing off the powerful components, and it includes MSI’s Silent Storm cooling thermal system, which uses three airflow streams to cool the most important components.

The Pro 24X is a slimline all-in-one PC that measures just 6.5mm thin. It features an IPS panel, Intel Core i5-7200U CPU, Intel Optane technology, NVMe PCIe M.2 SSDs for super-fast storage, and according to MSI it will be easier to upgrade some parts compared to other all-in-one PCs.

It has a 144Hz refresh rate and AMD FreeSync technology, making it an ideal monitor for PC gamers.

MSI also revealed a pair of more conventional gaming monitors, the Optix MAG271CR and MAG241CR. These are the first monitors to use MSI’s new Gaming Echo technology, which uses RGB lighting on the back of the monitor which reacts to in-game audio and lighting effects, giving you an incredibly immersive experience.

If those monitors above still don’t seem fast enough, then you’ll be interested in the MSI Oculux NXG251, which features an incredible 240Hz refresh rate, Nvidia G-Sync technology and a 0.5ms response time.

MSI is also an ace at building PC components as well, and it has introduced the B450 Tomahawk motherboard for the AMD Ryzen 2nd Generation processors, and supports AMD processors using the AM4 platform.