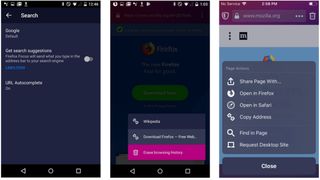 Mozilla has launched a new version of Firefox Focus, its privacy-focused browser for iOS and Android that lets you erase your browsing history with a tap, blocks ads by default, and saves no trace of your activity once it's closed.

If you're already a Focus user, the first thing you'll notice is the browser's new look, which has been updated for Android Pie and iOS 12 with redesigned URL bars, icons and menus.

Firefox Focus can now also offer suggestions from your chosen search provider when you begin typing in the address bar. This feature is turned off by default in case you don't want to share your searches – to turn it on, head into the app settings and tap the switch.

There are some platform-specific upgrades as well. Firefox Focus for iOS now supports Siri Shortcuts, which you can use to set and open your favorite websites, open Firefox Focus, and more.

Firefox Focus for Android has received some updates under the hood, with a switch to Mozilla's own mobile engine, GeckoView. This won't have any noticeable effect yet, but will enable Mozilla to make more privacy-boosting improvements in the future – including features no other browser on Android can offer – and allow for integration of speed-boosting Firefox Quantum technology.

When TechRadar met Firefox vice president Mark Mayo last year at Mozilla's Glass Room art installation, he explained that despite Focus being relatively new, it was his default browser.

At that point the browser didn't yet support tabs, but its simple, security-first approach already made it a viable option for anyone concerned about their privacy when browsing on their phones.

With these new features, plus improvements behind the scenes, it's rapidly becoming a viable option for anyone who prefers a more feature-filled browser. We're particularly interested to see what developments follow the move to GeckoView, and we'll keep you updated when we know more.