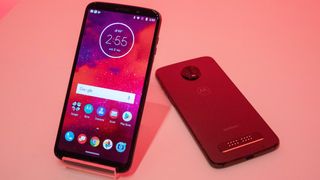 We've heard quite a few rumors about the Moto Z4, like the fact it could have four rear cameras, and could run on the cutting-edge Snapdragon 855 chipset, so it was starting to look like the Moto Z4 could be a premium smartphone – but according to new leaked renders we should set our expectations a little lower.

Renowned leaker Evan Blass has shared on Twitter some prospective images of the phone, showing all sides, which suggest it could even be a step down from the Moto Z3.

One of the most intriguing features of the renders is the camera – there's one, a far cry from the quad-snapper situation we had heard rumored, and a step down even from the Moto Z3's two.

It could be the case that extra camera capability can be added via purchasable extensions – the Moto Z4 will be a moddable handset like the Moto Z3, judging by the Moto Mod connector at the bottom of the rear of the device.

The renders do back up something we've heard though – an early rumor suggested the Moto Z4 will have an in-screen fingerprint scanner, and the lack of a side or rear-mounted sensor suggests this could be accurate.

One other noticeable distinction between the renders and the Moto Z3 is that the top and bottom notch is noticeably thinner on the renders, so lots of Motorola's upgrades for the new phone could be in the display department.

If Motorola keeps up its yearly release schedule for the Moto Z series, we could see the Moto Z4 in the next few months. Leaks and renders usually give us an idea of what to expect in new handsets, but since the Moto Z4 leaks have contradicted each other frequently, there's a lot we don't know about the upcoming device.