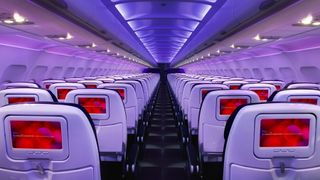 Just try not to spill your complimentary tea or coffee on your tablet!

Trials were conducted earlier this year, and the new wireless in-flight entertainment system has now been installed and switched on in 37 aircraft used for domestic flights, as well as flights to New Zealand and the Pacific Islands.

"We were instantly drawn to this technology because it represents a quantum change in the way entertainment is experienced in the sky," said Mark Hassell, Virgin Australia Chief Customer Officer.

"Our customers are the first in the region to be able to stream content to their very own personal device and the feedback we are receiving is fantastic."

For the curious, the aircraft equipped with the new tech are Boeing 737-800 and Embraer 190, and the roll-out will be complete by the end of the year.

Compatible devices include Windows laptops, as well as iPhones, iPads and Android devices, with the service available for free.

To access the new technology, you'll have to first download Virgin Australia's In-flight Entertainment App and activate it before you even get onto the flight.

You'll still have to switch your device off during take-off and landing, but when the seatbelt light is turned off, you can turn your device back on in flight mode.

Then, with wi-fi switched on, you can use the Virgin Australia Australia's In-flight Entertainment App to connect to the server, which is placed on the aircraft.

According to Virgin Australia, you'll have access to "hundreds of hours of movies, TV shows and music", which is streamed to your device through wireless access points located throughout the aircraft.