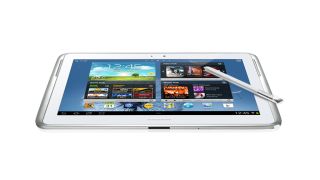 A benchmark result has popped up online for a device known as the Samsung GT-N5100, and the general consensus seems to suggest it's a 7-inch Galaxy Note tablet.

The latest tablets from the South Korean firm are the 10-inch Samsung Galaxy Note 10.1 and Google Nexus 10, with the latter sitting alongside the smaller Asus-made Nexus 7, and it looks like Samsung is keen to get in on the tiny-tab action.

Information on this rumoured device appeared on the Nenamark site revealing the device packed a 1.6GHz quad-core processor, ran Android 4.1.2 Jelly Bean and had a 1280x720 screen resolution – a touch lower than the Nexus 7 and Kindle Fire HD.

If the Samsung Galaxy Note 7.0 does indeed exist you can expect it to sport the firm's S Pen stylus as it will probably follow on from the Galaxy Note 2 smartphone and Galaxy Note 10.1 tablet.

Although the idea of Samsung releasing a refreshed 7-inch tablet is believable, especially after the mediocre reception the Galaxy Tab 2 7.0 received, these benchmark results can't be taken as gospel.

Results can be faked and we have in the past seen false benchmarks appear online claiming to be something they're not, so take this with a pinch of salt.

Unsurprisingly there's no word on the Samsung Galaxy Note 7.0 release date or price, but we'll be keeping our eyes peeled at CES 2013 and MWC 2013 just it case it makes an appearance.

From Nenamark via Phandroid