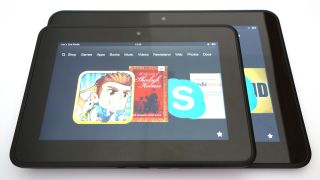 Kindling on the rumour fire

It's been almost a year since the Kindle Fire HD was announced, so it's about time the Amazon tablet had a bit of a refresh - and that could well be on its way if some new benchmarking data is to be believed.

Now, you can't always believe a benchmark - bear that in mind - but the data in question relates to a product referred to as Amazon KFAPWA which, when you take the specs into account, is likely a new Kindle Fire HD model.

Amazon gave the current Kindle Fire line-up a bit of a price chop last week, which sparked a flurry of rumours that a new batch was incoming.

Will Amazon follow the crowd and announce its new tablets at IFA 2013? We'll be at the show to bring you all the news as it breaks.

From GFX Bench via Android Community