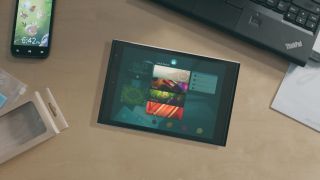 Jolla's first tablet, inspiringly called the Jolla Tablet, is something that a lot of people want if the money raised by its crowdfunding campaign is anything to go by.

The Indiegogo campaign ended recently with a total of $1,824,055 raised, which is 480% of its original goal. That extra money has allowed it to reach two stretch goals, one of which is to add a microSD card slot with support for cards of up to 128GB and the other is to add a split-screen mode.

Of course the real star of the show is the Sailfish OS, as this will be the first tablet running it. With the exception of its split-screen feature the OS looks similar here to on the Jolla Phone, with gesture-based interactions, the ability to run Android apps alongside native Sailfish ones, and a powerful multitasking view, allowing you to interact with apps without opening them in full.

But the Jolla Tablet is also bringing some new features as it evolves the operating system to Sailfish OS 2.0 and adds the ability to customise the theme of the slate with 'Ambiences', which don't just change the look but also which apps are given prominence. For example, if you switch to 'Gaming' you'll have quick access to games from your home screen.

It also adds 'Events', which is essentially a screen dedicated to notifications, showing all your emails, reminders and more in one place.

As the campaign is finished it's no longer possible to reserve the tablet at a discounted price, but Jolla expects that it will retail for around $249 (roughly £159 / AU$299) if and when it goes on sale, which will presumably happen sometime after May 2015, when backers are expected to get their slates.