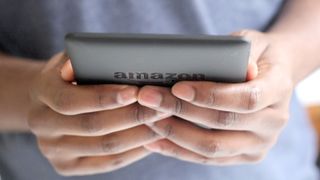 How thin is too thin?

With anticipation running high for this week's rumored Amazon smartphone unveiling, interest in all things Amazon is at its peak, making this a perfect time to see what's coming next.

BloombergBusinessweek has offered a glimpse into the top-secret lair where Amazon does most of the R&D work for new hardware such as Fire TV, not to mention a smartphone expected to be announced at a media event on Wednesday.

Known as "Lab126," the facilities are home to more than 1,600 employees, many who have been working there since Amazon founder Jeff Bezos set up the division to create the first Kindle e-book reader back in 2004.

Amazon's hardware gurus will reportedly return to the Kindle well for a new "remarkably thin" version of the Kindle Paperwhite codenamed "Ice Wine," with insiders also dishing on a Square-style credit card reader Amazon may use to shore up its payment business.

The report from "The Everything Store: Jeff Bezos and the Age of Amazon" author Brad Stone doesn't offer details as to how Amazon plans to slim down the Kindle, instead offering a tantalizing peek into other devices spearheaded by the billionaire CEO.

According to loose-lipped employees, Amazon's rumored smartphone has been in gestation at Lab126 since 2009, along with other so-called "science projects" that include a device capable of projecting computer images onto any surface.

Said to be powered by a forked version of Android similar to the company's Kindle Fire tablets, Amazon's smartphone will reportedly offer a 3D user interface that uses four infrared cameras to track the user's face and pupils as they're looking at the display.

Known internally as "Duke," the Amazon handset may wind up an AT&T exclusive at launch thanks to the carrier's Sponsored Data program, capable of offloading some or all mobile data expenses to a user's annual Amazon Prime subscription.