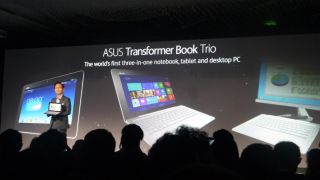 Unsatisfied with notebook-tablet converter devices? Asus has heard your cries, and has announced the Transformer Book Trio, a three-in-one notebook, tablet and desktop PC.

Not only that, it also switches between Windows 8 and Android Jelly Bean in a heartbeat via a hotkey - though only if you have the keyboard attached (otherwise you're only on Android).

Of course, you'd expect some decent specs underneath this transformer and they're not bad at all. The Trio is powered by dual Intel processors with a Core i7-4500U processor for Windows 8, and a 2GHz Intel Atom Z2580 chip handling Android Jelly Bean.

As for the screen, the Trio has a 11.6-inch, 1080p display. Meanwhile there's a 1TB HDD in the dock and 64GB of flash storage inside the tablet itself.

We've been told that a release around Q3 is expected at the moment, but Asus is keeping tight on pricing for the time being.