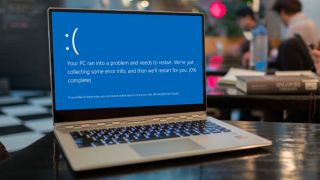 Microsoft’s Windows 10 update woes are continuing, with the company having to halt the recent Windows 10 November 2018 cumulative update (KB4467682) after reports it was causing PCs to crash and display the infamous ‘Blue Screen of Death’.

At first, the errors appeared to only affect the Surface Book 2, Microsoft’s own hardware, which lead to the company halting the update for those devices.

However, Microsoft has now revealed that the problem is more widespread, and it has now pulled the update from all devices.

In a new support post, Microsoft explains that “After installing this optional update some users have reported getting a blue or black screen with error code, “System thread exception not handled.” As a precaution, we have removed this optional update from Windows Update and Microsoft Update Catalog to protect customers.”

Pulling an update due to it causing PCs to crash is embarrassing enough at the best of times, but Microsoft has had a brutal few months recently where it has had to halt the rollout of a number of updates, including the major Windows 10 October 2018 Update.

The update that has caused the new problems is an optional cumulative update that packages a number of ‘fixes’ into one download. Hopefully this means that it won’t have affected quite as many people as other major updates. Still, it’s not a good look for Microsoft.

According to the company, “fixes and improvements will be available in the December 2018 security update release and will include a resolution for this issue,” so if you are affected, uninstall the update and wait for a new one. That’s if the next update doesn’t get pulled as well. Going by Microsoft's recent form, we can't rule that out.