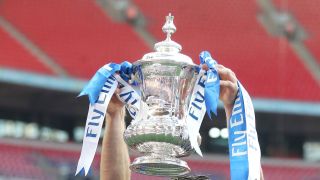 Tell us we aren't the only ones that get emotional when Abide With Me is belted out immediately before the FA Cup Final. We aren't? Phew! The stage is set at Wembley Stadium for the climax of the 2018/19 English football season. Manchester City and Watford are set to do battle under the now-famous arch. Is the outcome a foregone conclusion? Or is there a shock in the air? Whoever you're cheering on, you can get a Man City vs Watford live stream in the 2019 FA Cup Final wherever you are - the time is here.

The FA Cup final between Man City and Watford will take place at football's spiritual home - Wembley Stadium in London.

Today's kick-off for the game is at 5pm BST (12pm ET, 9am PT in the US, and 2am in Australia in the early hours of Sunday morning).

No matter how big a Hornet's fan you are, there's no denying that Man City are overwhelming favourites for this game.

A quick look at their team sheet (and how much the club has spent on players) should tell you everything you have to know. Aguero. Kompany. De Bruyne. Sterling. Sane. Silva squared. And with Pep Guardiola calling the shots from the bench, there aren't many games that the blue side of Manchester go into as second favourites. And now with the Premier League and EFL Cup in the trophy cabinet, the historic treble is well and truly on.

It's Watford's first FA Cup Final appearance since 1984 and they will likely lean on influential leader and club captain Troy Deeney who will lead the line and set the tone and tempo for his team mates. With flair players Maxi Pereyra and semi-final hero Gerard Deulofeu, Watford have the creativity and skill in midfield to trouble the Wolves defense, but they certainly won't have it all their own way.

You can watch the players try to carve out their little piece of history by getting a live stream of all the FA Cup final action from wherever on Earth you are. Below we're going to talk you through the best ways to watch the FA Cup final in the UK and the rest of the world so you can ensure you can easily live stream one of the biggest matches in the footballing calendar.

How to live stream FA Cup final in the UK for free:

The BBC will be hosting the FA Cup final on Saturday May 18. It'll be on BBC One - naturally - with the kick-off ready for 5pm.

You'll be able to watch it live on TV, through the BBC iPlayer app or online with the iPlayer live stream. You'll have to pay for a TV license if you want to watch this in the UK though. There's also the BBC Sport website that will be live streaming the whole game in a similar way to the BBC One coverage too. The game will also be shown on BT Sports, if you're subscribed and prefer its coverage.

The alternative is to watch the game on TVPlayer.com, which is a robust, high-quality streaming site that's absolutely free and has all your favourite Freeview channels in one place.

Out of the UK? Try to watch the game from abroad and you'll find that the BBC coverage has been geo-blocked. But that doesn't mean you can't watch - you could download and install a VPN service, which will help you to make your laptop or mobile appear like it's back in the UK...

Live stream the FA Cup final from outside your country

In the US? Then keep scrolling, as we have your viewing options below...spoiler alert, you'll need an ESPN+ subscription. And footy fans Down Under, in Canada and in India can also see who's broadcasting there.

But if you're abroad for the game and find that you can't watch your home coverage online because it is geo-blocked, we have a handy alternative to allow you to watch as if you were back on your sofa.

The only legal alternative we know of is to download and install a Virtual Private Network (or VPN). The software allows you to change your IP address to a server in another country so that you can watch online as if you were there. What's more, using a VPN also makes you more secure online, as your activity will be encrypted.

We've tested and reviewed more than 100 providers to see which one to recommend and we rate ExpressVPN as the absolute best. It's fast, secure and compatible on loads of different devices (Amazon Fire TV Stick, Apple TV, Xbox, PS4, etc). It heads up our top 3 picks (see below) and it even comes with a 30-day money back guarantee so that you you can try before you buy.

1. ExpressVPN:  the best all-round VPN for streaming, comes with 30-day trial and 3 months FREE with an annual plan
2. NordVPN: SmartPlay tech makes NordVPN a great, affordable choice for streaming
3. IPVanish: puts premium on security and supports up to 10 devices, so great on the go

How to watch the FA Cup final: US live stream

Having launched in 2018, online subscription service ESPN+ is now picking up more and more momentum - along with a greater range of sports. And now's it's managed to snag FA Cup football, too.

But the best news is that you can grab a seven-day FREE trial. So if you haven't used ESPN+ before, you can sign up for that and get a taster of its sports coverage without paying a thing.

How to watch Man City vs Watford live: Australia stream

ESPN being the main host for the FA Cup final Down Under. You can watch live on that channel with your TV, or you can stream it online as well.

Whichever way you do it, you'll have to be awake for the 2am kick off. And don't forget that if you're outside Australia and still want to watch either of those options, then you'll require a VPN to change your IP location back to Australia.

How to live stream the FA Cup Final 2019 in Canada

Sportsnet has taken up the mantle this year to broadcast the FA Cup Final in Canada. You'll need to log in in time for the start time of 12pm ET.

How to live stream Man City vs Watford football in India

A bit like in the US and Australia, Sony ESPN has got a grasp on the 2019 FA Cup Final if you're in India and keen to watch. Kick off is at 9.30pm New Delhi time.

And if you haven't yet cottoned on, using a VPN is the way to tune in to this coverage if you're desperate to watch but are outside India this weekend.