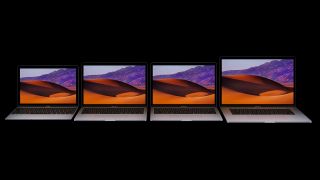 Another year, another MacBook Pro. While the MacBook Pro 2016 was a fundamental shift for Apple’s flagship laptop, the 2017 edition is more of an incremental upgrade.

Aside from housing the current Intel Core processors, the latest MacBook Pro is nearly identical to last year’s model. Regardless, let’s take a closer look at the exact changes, and whether it's worth it to dive in now after passing on the previous generation – or upgrading from that model.

Aesthetically, there’s nothing new to see here. Although, there aren’t any new flourishes here, the MacBook Pro is still arguably one of the best built laptops on the market.

Likewise, the displays on the new MacBook Pros aren’t any different, but still serve up a gorgeous picture. The 13-inch model comes with a 227ppi screen at a 2,560 x 1,600 resolution.

Now we come to the biggest change within the MacBook Pro 2017 model, the addition of the latest Intel Kaby Lake processors. On paper, all these 7th generation processors offer higher boost clocks that should translate into better performance.

With the latest processors also comes a new generation of integrated graphics, which should better handle streaming 4K media as well as media editing and creation. The 15-inch models also now feature higher-end discrete graphics, with the AMD Radeon Pro 555 and Radeon Pro 560 with up to 4GB of VRAM.

Kaby Lake should also afford Apple’s latest flagship laptops longer battery life, but both models still claim to run for the same 10 hours as the previous iterations. We’ll have to see if battery life with the latest hardware is better or worse in our full review.

One other little hardware tweak Apple has introduced here is all the memory across the MacBook Pro line now operates at a 2,133MHz frequency. The previous entry level model of the MacBook Pro 2016 came with 1,866MHz RAM. Unfortunately, memory capacity still peaks at just 16GB.

Users have complained about the high price of the MacBook Pro and Apple’s solution this year was a lower priced $1,299 (£1,249, AU$1,899) 13-inch non-touch bar model. Unfortunately, this new entry-level unit comes with only 128GB of storage, half the amount data capacity found in the lowest priced 2016 model.

Should you buy one?

If you were disappointed that Apple didn’t debut its new MacBook Pro design with the latest Intel processors, the 2017 models are just the thing you’ve been waiting for. Users looking for the most powerful MacBook might also squeeze more out of the updated discrete graphics on the 15-inch model.

However, if you were holding out for increased RAM capacity, more storage or a 4K display, you're still out of luck here.

Other than those small upgrades, the newest MacBook Pro doesn’t bring anything else to the plate. If you’re looking for something to just handle your everyday computing tasks, the older, Skylake-powered MacBook Pros will more than suffice and are likely to go on sale with lower prices soon enough.