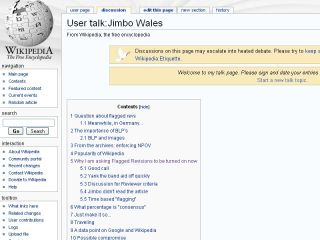 The row over Wikipedia's open editing format is rolling on, with comments from founder Jimmy Wales over 'flagged revisions' causing a schism in the online encyclopaedia's community.

Wales suggested that the site needed to adopt a more closed approach to editing key articles – preventing the spate of fake deaths that have been undermining the site's authority.

This 'flagged revisions' scheme has jarred with many in the community: they feel that it's the open approach that has made Wikipedia grow into its current position as one of the most visited websites on the planet.

Wales insists that a 'flagged revisions' scheme would be a better alternative to locking pages from edits entirely.

"This nonsense would have been 100% prevented by flagged revisions," wrote Wales in reference to an edit on Ted Kennedy's page after he suffered a seizure at a post-inauguration lunch.

A community poll showed a 60 per cent agreement with the flagged revisions, leading to Wales asking for a time-limited test.

However, a German trial has shown up a problem which Wales acknowledges: "The proposed configuration is significantly conservative as compared to that of the German Wikipedia, which has been successful with all articles flagged.

"They do, however, have an approval delay of three weeks at times, a figure which I regard as unacceptable. Our version should show very minimal delays (less than 1 week, hopefully a lot less), because we will only be using it on a subset of articles, the boundaries of which can be adjusted over time to manage the backlog."

However, opposition to 'flagged revision' pages has quickly surfaced with one person saying: "What could have been prevented, exactly? (A) A couple of articles' inaccuracy for five minutes? (B) Some bad press? (A) is so trivial I have to assume it's (B). But the genius of Wikipedia is that the principle of "anyone can edit"…works, even though the media chatterers don't understand or respect it. So kowtowing to bad press seems wrong-headed to me."

It's a fascinating argument and one that's been crafted in the modern digital world.

On the one hand, Wikipedia wants to be seen as a respectable repository of information, but on the other hand it's built on openness, so any move to confine its edits will be seen as a betrayal.