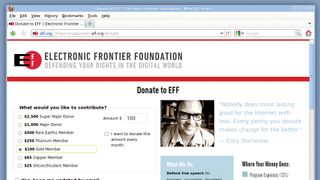 Our freedom to share information, speak our minds, come up with new ideas and keep our lives private is being threatened. Governments are continually seeking new ways to monitor what we're doing, while big businesses are constantly trying to lock us into their products. Bit by bit, our freedoms are being eroded.

Popular media often makes comparisons between our current situation and George Orwell's 1984, which many people find hyperbolic. But think about it for a minute: governments are tapping our phone lines, reading our emails, and watching our online movements.

Social media sites and search engines are building up giant databases of our browsing and purchasing habits. And all of this takes place against a backdrop of perpetual so-called terrorist threats, politicians in bed with media executives, and an ultra-wealthy elite getting even richer.

So it pays to be vigilant - perhaps even a tiny bit paranoid. Airstrip One wasn't built in a day, nor will a total police state suddenly appear overnight. But times are changing, the threats to our freedom are coming from every direction, and fighting this battle demands a great deal of persistence and determination.

One group firmly on our side is the EFF. The Electronic Frontier Foundation's goal is "defending your rights in the digital world", and its activities span the full gamut of freedom fighting: providing help with court cases; issuing white papers that explain current threats; running campaigns to spread awareness of various issues; and developing technologies that make our online activities safer from prying eyes.

It's a non-profit, donation-supported organisation based in San Francisco with an impressive staff roster, including attorneys, analysts and activists - and generally with a strong pro-free software and pro-GNU/Linux culture. Read on to find out how the EFF came together, what it has done so far, and how it's preparing for upcoming battles.

Taking on the United States Secret Service is a pretty risky venture...

But that's exactly what the EFF did, shortly after it was founded in July 1990. The Secret Service had raided a small videogames book publisher, looking for a stolen technical document that might fall into the wrong hands. Ultimately, it found no evidence to press charges, but the publisher ended up facing bankruptcy, after having its computers seized, missing deadlines, and being forced to lay off staff. Worst of all, the Secret Service erased much of the publisher's valuable data.

A group of civil liberty-aware geeks - who had seen similar instances of rights being trampled on in the growing digital and online world - caught wind of this. So Mitch Kapor (founder of Lotus and later chair of the Mozilla Foundation), John Perry Barlow (former Grateful Dead lyricist), and John Gilmore (an early Sun Microsystems employee) founded the EFF, taking extra funding from Apple co-founder Steve Wozniak.

Their first major task was to support the publisher in a lawsuit against the Secret Service. In the end, the publisher won two of the three counts, $50,000 in damages and $250,000 in attorney's fees. Most importantly, however, the issue of whether electronic communication deserves the same legal protection as other forms of communication (such as telephone calls) came to the forefront.

The court ruled that the Secret Service had no right to access the publisher's emails without a search warrant that specifically referred to the emails, setting a precedent that remains today. The EFF went on to assist in many other cases, as we'll see over the page, and its scope broadened as internet usage sky-rocketed and new problems emerged in the 1990s.

Today, Gilmore and Barlow remain on the EFF's Board of Directors, joined by other famous names, such as Brian Behlendorf, early Apache developer, and John Buckman (founder of music service Magnatune). Together they oversee a team of 44, with tens of thousands of supporters around the globe.