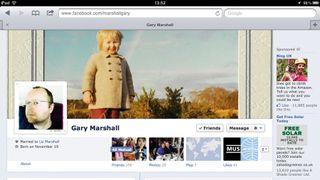 Humans are social creatures. From scribbling pictures on cave walls to making funny comments on people's Facebook posts, we love to share with other people.

Thanks to devices such as iPhones, the gap between spotting something interesting and showing it to your friends can be as small as a few seconds, and social networks' global reach means it's as easy to connect with someone in California as in Carlisle.

In this feature we'll follow famous people on Twitter, hide our party photos from the boss on Facebook and discover how to share images, ideas and interesting things with people on the other side of the planet.

We'll also discover some more specialist social networks for particular kinds of content, and the apps that enable you to share special things with just your closest friends and family. Whether you're a networking novice or an experienced operator, we'll discover the best ways to share with the people who matter most to you. Go on, get social with your iPhone, iPod touch or iPad.

Funny, occasionally foolish, but fun and full of famous faces: of all the social networks, Twitter may well be the coolest.

Imagine you've been invited to the world's best party. Your friends are here, of course, but so are some of the people you idolise: the people who make your favourite things, who created your favourite music or who cracked your favourite jokes. Depending on your mood you can be amused by comedians, get involved in a huge serious discussion or just laugh at talent shows.

Tweets are mainly - but not exclusively - text. You can also include images and video, either by hosting them somewhere on the internet and tweeting their address, or by uploading them to a dedicated service such as Twitpic. Many apps support such services automatically.

Twitter has some other handy features, too. One of the most useful ones is Lists, which you can use to manage your Twitter feed when you're following so many people's updates that the volume of tweets becomes a torrent. Instead of viewing everything at once, you can organise the people you follow into different categories, so you might have a list of friends, a list of your favourite musicians, a list of amusing accounts, and so on. You can make your lists private or public.

Twitter also enables you to browse trending topics, which are the most discussed conversations. Tapping on a topic shows you the tweets about that topic whether you follow those people or not, and once again, it can be a good way to find new and interesting people.

You can also store tweets as favourites, which enables you to file interesting things so you can find them again later.

Using Twitter is very very easy. All you really need to know is somebody's username! So for example, ours is @tapmaguk. If you want to send us a tweet - please do! - then create a new tweet beginning with @tapmaguk.