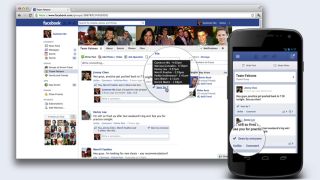 Now you can see how many people are ignoring you

Now, whenever you visit a Facebook group you can see exactly who has seen each post and when, which will no doubt appeal to those with stalker-ish tendencies.

It's not clear if you can turn this off if you don't want it to be known that you were on Facebook reading a group post at 11.23am when you were supposed to be in that big marketing meeting on the third floor, but we're trying to find out. For a friend.

As well as the group 'improvements', Facebook has released a major update to its developer SDK that will make it easier and quicker for devs to create iOS apps for Facebook-integrated iOS apps.

The SDK update also allows devs to make use of the iOS 6 native Facebook login, with backwards compatibility for all apps on iOS 4.0 onwards.

Another treat for developers is the new iOS Developer Centre which offers help, tutorials and support in one handy place.