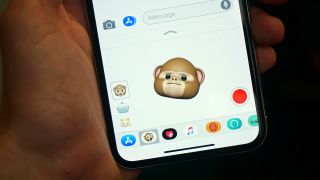 Is Apple monkeying around with its upgrades? Image credit: TechRadar

The hype train for the iPhone 11 has started, so we've been hearing leaks left, right and center, each with more outlandish features than the last – but it looks like the upcoming handset could simply be a minuscule upgrade over the iPhone XS, rather than a revolutionary new device.

In a note from analysts Mizuho Securities, shared with AppleInsider, the experts share what they know and suspect about the new iPhone 11, and it feels a lot like the spec list for the iPhone X or XS.

According to the note the iPhone 11, and its equivalents to the iPhone XS Max and iPhone XR, will have exactly the same measurements and screens as the 2018 iPhones, so no upgrades in that regard.

In addition, it looks like the phones won't have radical new internals, as the analysts think the iPhone 11 chipset will be a negligible improvement over the A12 Bionic in the iPhone XS.

The only 'major' difference the note mentions is an improved rear-camera setup, so it looks like the iPhone 11 camera will consist of a three-sensor array, which is one more than the XS.

This sounds impressive until you remember that even budget phones like the Huawei P30 Lite have three-camera setups, and mid-range handsets like the Honor 20 Pro have four, so Apple is desperately playing catch-up in this regard.

Concluding the note, Mizuho Securities states "we expect the 2019 models to lack novelty", which is saying a lot given that the iPhone XS was barely an upgrade over 2017's iPhone X.

We'll know more about the new iPhone 11 in September when we expect it to launch – hopefully it will be a more interesting device than the note suggests, because if this leak is correct, the new iPhone could be a seriously disappointing phone.

Stay tuned to TechRadar for more news on the upcoming Apple phones and, eventually, reviews and impressions when we get to see them.