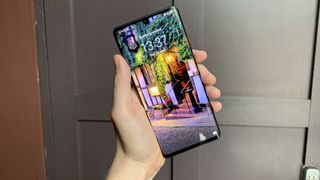 The P30 Pro, above, doesn't have much bezel, but the P40 Pro might have even less (Image credit: Future)

Update: We've since been informed this leak is false and it's a mock-up created by someone who wanted to come up in an example of what the Huawei Mate 40 Pro could look like. You can see the image on this Instagram account.

Original story: The Huawei P40 Pro has been leaking a lot lately, but we may have just caught our closest look yet at the front of the phone, with a leaked photo supposedly showing the handset and providing a very clear view, unobstructed by a case.

The image, shared by a user on Weibo (a Chinese social network) and spotted by IndiaShopps, can be seen below, and what’s immediately striking is that there’s no chin at all, and no real bezels at the top or sides of the screen either.

In all, it looks like the Huawei P40 Pro could have one of the highest screen-to-body ratios we’ve yet seen if this image is accurate, though the effect is slightly spoiled by the dual-lens selfie camera in the top left corner.

You can also make out what looks to be a steep curve at the sides of the screen, which is something we’ve heard rumored before, but also heard might not be present.

On the whole this image largely lines up with most, but not all, previous leaks, though it was hard to tell just how small the bezels were in most of those.

Since this is just a leak, and since there are some conflicting leaks, we would of course take this image with a pinch of salt, but it certainly looks convincing and would somewhat live up to Huawei’s claim that the P40 range would sport a ‘never seen’ design.

We’ll know the truth soon, as Huawei is set to announce the Huawei P40 and Huawei P40 Pro at the end of March, and TechRadar will be reporting live from the event, so stay tuned.